The Fiscal Cliff and Life in the Freshman Dorm, or why “The Pigeon is Never Wrong!”

Congress and The Continuous Lack of Improvement in Behavior

Now, I generally try to avoid dabbling in divisive politics, but this one time I can’t resist. We have all been following the fiscal cliff dance in Washington. As I write, the task of coming up with a way around the cliff has been delegated to those two great charismatic leaders of the Senate – Harry Reid and Mitch McConnell, which I know inspires confidence in all.

Last night President Obama made the statement that “This is déjŕ vu all over again. Outside of Washington, nobody understands how it is that this seems to be a repeat pattern.” Referring, of course, to the tendency of Congress, with two years warning and anticipation, to wait until the last hour to do anything constructive.

Well, with all due respect, Mr. President, that is not exactly correct. For you see, this is a phenomena that is well known in every freshman dorm, and by every pigeon or mouse that has been subjected to behavioral research. 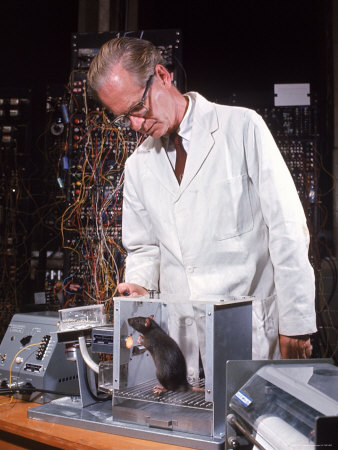 B.F Skinner and his Skinner Box

Let me explain in its simplest form. There is something called “schedules of reinforcement” which is the study of how the timing of positive reinforcement effects behavior. Within that, there is something called a fixed-interval schedule. Very simply, a monthly pay check, an annual bonus, the end of a semester in college, a test at the end of the month, etc., are all fixed intervals. The reward is delivered at the end of the time period. When on such a schedule the pattern of behavior is entirely predictable. The pigeon or mouse learns that there isn’t much payoff in performing during the early part of the period, but as the end of the period approaches, the rate of behavior increases. After the reinforcement (the cheese, for example) is delivered, the mouse or pigeon pauses – what’s called a “post-reinforcement-pause.” This pattern is seen as a “scallop.”

Here’s what happens when there is an end-of-month bonus for the number of cars sold by auto salesman, for example.

Now, I couldn’t possibly be implying that students at Harvard, in high school, or the brilliant, motivated and charismatic leaders we elect to Congress are no better than a pigeon pecking away for measly pellets in a Skinner box. Of course, not. We are intelligent and we all knew in the freshman dorm that if we studied our history lessons each night throughout the  semester we would not have to cram for the test the night before. Right? Wrong! We all did it. When it comes to overcoming the effect of schedules of reinforcement we are not much better than pigeons.

The next time you are in a casino and look out at all those good folks pulling the one armed bandit realize that you are looking at a huge Skinner box in which a party of pigeons are pecking away on a variable-ratio schedule of reinforcement which produces addictive and high rate behavior. Trust me, there are behavioral psychologists plotting the data and manipulating the schedule of reinforcement!

So, the behavior of our charismatic leaders of the accounting firm Read, McConnell, Boehner and Pelosi are doing exactly what the system predicts. In fact, every year, there are very few bills passed during the first weeks of a session of Congress and bills tend to fly through during the closing days. That’s your scallop.

Of Mice and Men and Motivation

There are a few possible answers to this dilemma. And they all must, in some form, change the way Congress people are rewarded or punished for their behavior. Plans, talk, slogans, ideologies, etc. will do no more good with Congress than with pigeons.

First, our friends in Congress receive compensation, retirement benefits, healthcare, vacations, expense allowances, etc., with absolutely no contingency to performance. In other words, every student gets an “A” without studying, every salesman gets the top bonus without selling any cars, and every mouse gets the cheese without moving. This is the essential problem with communism. The absence of contingency between behavior and reinforcement. We all know that this will produce delinquent behavior. So, there must be a link to performance and pay-off.  The absence of this link is why congress gets a 9% approval rating. That’s about the same rating we would give to communism as an efficient economic system and for the same reasons.

So, how can we link rewards to congressional performance? Here are a few suggestions:

I know some will read this and say “Good heavens, man! We elect these people because we think they are responsible, mature, and good leaders. Do we really need a system of positive reinforcement that rewards actual performance?” I understand the objection. But, the data speaks! What does it tell you? Or, as B. F. Skinner used to say to his students “The pigeon is never wrong!”

OK, so there are some ideas from me. What are yours? No ideological rants, please. It’s not about ideology, it is about management!

From Russia with Lean