Lean Leadership – The ONE Quality that Matters Most

I have thought for a long time that there is a profound relationship between the personal qualities, even spiritual qualities, of leaders and the management practices of the organization. When we implement lean management we tend to be focused on value stream maps, leader standard work, problem-solving skills, etc., all of which are important, but all of which produce little if they are not accompanied by one essential personal characteristic.

Watching bits of the testimony of Rupert Murdoch and son before the British Parliament I was struck by his planned and deliberate comment that this was the most humble moment of his life. I have no doubt that was true. Rupert Murdoch is a man well known for bullying his way through business dealings and using his media empire to manipulate and bully political figures toward his own ideological view of the world. Humble is not a word likely to be used to describe Murdoch. Nor was humble a word that would have been used to describe the former leaders of Enron, General Motors, Tyco and many of the Wall Street investment banks that led us into an economic tsunami. Rather than humility, it is hubris that better describes these leaders and the entire culture of their senior management.

On the other hand, my involvement with Honda and some other truly great companies has convinced me that the one single most important quality essential to creating lean culture is the quality of humility. Jim Collins in Good To Great documents leaders who possess this quality of humility. He describes what he calls Level 5 Leadership: “We were surprised, shocked really, to discover the type of leadership required for turning a good company into a great one. Compared to high-profile leaders with big personalities who make head-lines and become celebrities, the good-to-great leaders seem to have come from Mars. Self-effacing, quiet, reserved, even shy – these leaders are a paradoxical blend of personal humility and professional will. They are more like Lincoln and Socrates than Patton or Caesar.”

Typifying this at Honda, the former President, Iri Irimajiri, sat at his desk in the open office area with all other managers, walked the floor every day to learn, not to speak, and wore the same clothes as every hourly employee. And, at senior management meetings when solving problems, a vice president would offer a suggestion and someone else would ask “Yes, but have you been on-the-spot to talk to the experts” those doing the actual work.

Humility is the Antecedent to Learning

Arrogance and hubris are the destruction of learning and learning is no where more important than at the top of the management process. It is the most important leadership quality.

Why is humility so important? It is all about learning, listening and inspiring.

First, lean culture is the result of attitudes of science, not ideological points of view. The leaders that built the Toyota Production System did not begin with a religious like belief that they then sold and pushed through the company, an approach common in our corporate culture. It was the opposite. It was the process of scientific inquiry. Don’t “get religion” – get science!

TPS or “lean” is the result of a thousand experiments. The lean leader watches the data and let’s the data speak. The subject of an experiment, or the dependent variable, is never wrong. B. F. Skinner used to say to his students “The pigeon is never wrong!” Pigeons respond to stimuli (independent variables) the way pigeons respond. It is YOU who must adjust your methods. Watch, listen and learn from the data. Learn to read the graph! The pigeon is teaching you more than you are teaching the pigeon. Every classroom teacher understands this same principle of interactivity between teacher and student, manager and employee, customer and supplier.

The customer is never wrong, as Dr. Deming would say. Listen to them. It is you who must change your methods to meet their needs. Too many times I have seen companies develop a new way of doing something, a significant change in their work processes, and then be personally invested in this new way. The manager’s ego is determined to make this new way work! To the degree that this is true, they do not watch the data and let the data speak. Experiment! Try a new method on a limited basis and watch the data. See the results and learn from those results. Do not pile on mistake after mistake when something is not working. Invest enough to learn, and then invest more based on what the data is telling you. Do not get “invested” from an emotional standpoint and then feel the need to make something work when customers and the data is saying something else. This is one of the forms of “waste” most often created by leaders.

These are the questions that should be asked of every team, including every management team.

One of the best articles on lean management, in my opinion, was an article published in the May 2004 issue of the Harvard Business Review by Steven J. Spear, titled “Learning to Lead at Toyota.” It describes how a new, but relatively senior manager is integrated into the Toyota culture. Bob Dallis, the new manager is assigned a coach, Takahashi, who leads him through his learning process.His integration will involve 12 intensive weeks in the U.S. engine plant and ten days working and making observations in a Toyota plant in Japan.

Listen to his first experience: “Bob Dallis’s first assignment at the U.S. engine plant was to help a small group of 19 engine-assembly workers improve labor productivity, operational availability of machines and equipment and ergonomic safety. For the first six weeks, Takahashi engaged Dallis in a cycle of observing and changing individual’s work processes, thereby focusing on productivity and safety. Working with the group’s leaders, team leaders, and team members, Dallis would document, for instance, how different tasks were carried out, who did what tasks under what circumstances, and how information, material, and services were communicated. He would make changes to try to solve the problems he had observed and then evaluate those changes.”

In other words, this manager’s first fourteen weeks at Toyota were spent “on-the-spot” learning to observe, conduct experiments and evaluate those experiments. Put another way, he was learning to engage in continuous improvement. This is the essence of lean management.What Bob Dallis was learning at Toyota was, more than any skill, the attitude of humility which is the antecedent to learning and improvement.

Lean cultures are able to engage in rapid improvement because they make changes with an eye on the data. They experiment and like any good scientist, they are willing to toss aside changes that don’t work. They can then quickly move on to another more productive experiment.

This humility, I believe, is the one most important personal quality of lean leadership.

President Lincoln and the Victory of Humility over Hubris

The reference to President Lincoln in Jim Collins’ quote is worth a moments meditation. Lincoln was a man who suffered chronic depression, at the time called “melancholy” so severe that he cried frequently and feared that if he carried a knife he would use it on himself. But one author, Joshua Shenk, argues that this suffering purposefully prepared him for the role he assumed. His opponents in the great Civil War, Lee and even more so Stonewall Jackson, fervently believed they were doing God’s will and prayed for his assistance against their enemy. They rode into battle believing they were God’s warrior and that God would surely assist them in their efforts. And it was this hubris in battle, particularly at Gettysburg, that led to Lee’s defeat.

On the contrary, Lincoln said “I shall be most happy indeed if I shall be an humble instrument in the hands of the Almighty, and of this, his almost chosen people, for perpetuating the object of that great struggle.” Lincoln prayed that he might be a humble instrument of God’s will, rather than praying for God’s help in doing his own will. This is not a small distinction and is part of his moral leadership.

It was also not coincidental that Lincoln was required to, and willing to, make change after change until he found the two generals, Grant and Sherman, who would lead his armies to victory.

Hubris lost, as it inevitably does, and humility won.

Leadership Lessons from the Obamacare Crisis 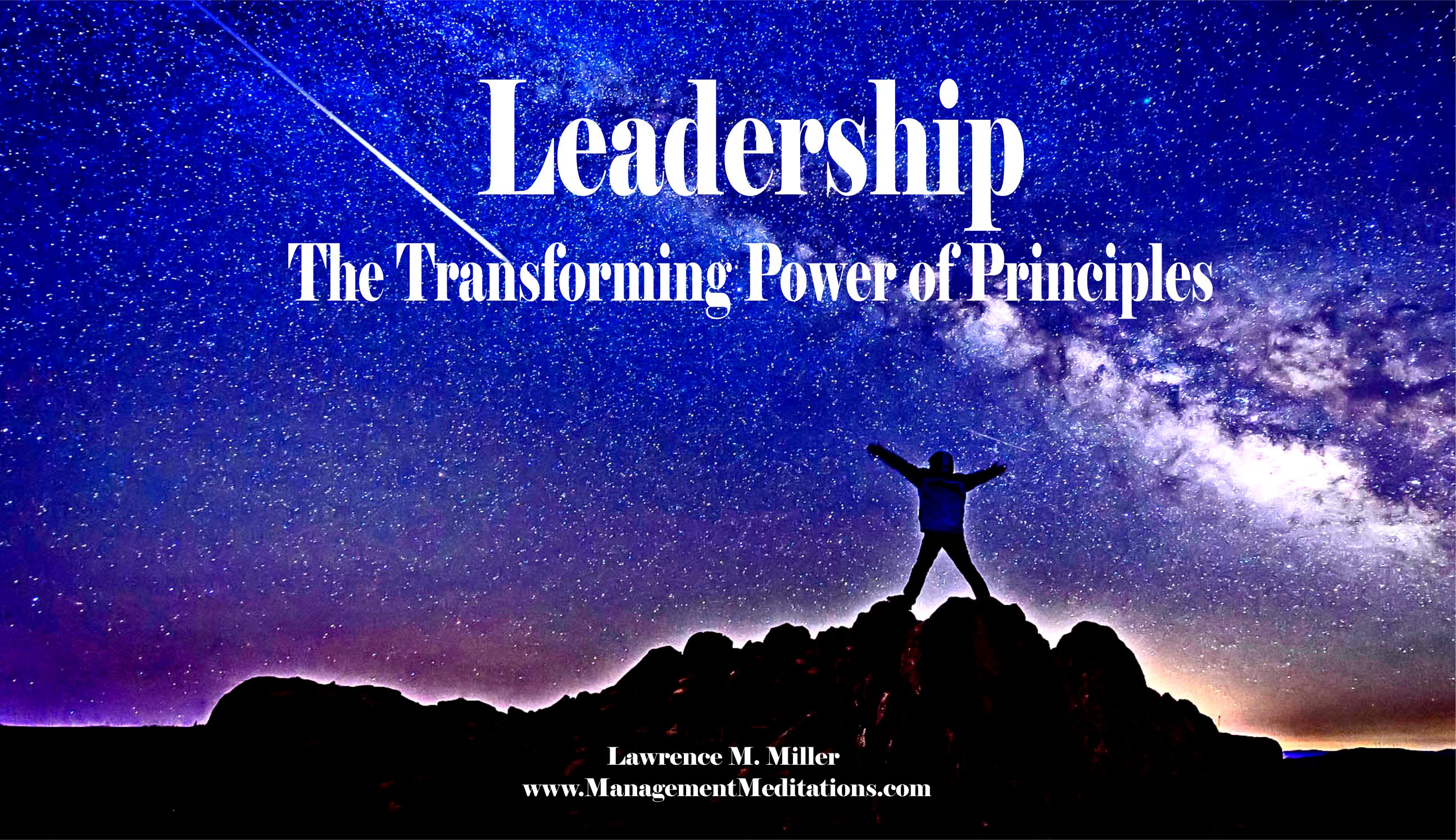